Damien: Omen II
Haven’t seen this since the original trilogy was shown late night on ITV in about 1990. By now our devil child is enrolled in military academy alongside his cousin. It’s all about puberty, ‘I don’t understand what’s happening to me’ and shit. Some good scenes (one shamelessly stolen from The Birds, another is familiar to viewers of The Dead Zone) and a creepy teen Damien. Lance Henriksen does a good (actually, make that bad) turn as a platoon sergeant.

Omen III: The Final Conflict
By now our antihero is a suave and handsome businessman, completely self-aware and ready to fuck shit up. Sam Neill is deliciously satanic. Mostly it’s all a bit hammy, though.

True Colors
John Cusack and James Spader as chalk-and-cheese best buds from college from opposite ends of the social spectrum whose lives diverge, morally and professionally. Dark, but could have been darker. The class prejudices are very distasteful.

The Last Boy Scout
Shane Black scripts, Tony Scott directs, Bruce WIllis and Damon Wayans star. Better than I imagined. Something to do with corrupt politicians and American football and private detectives and stuff. Some nice deadpan actioner bons mots.

The Long Kiss Goodnight
Shane Black scripts, Renny Harlin directs, Geena Davis and Sam L Jackson star. Better than I remembered (I saw it at the Odeon when it came out). Something to do with an amnesiac government assassin, before Bourne made it sexy. Geena Davis is most enjoyable as a prim suburban housewife/teacher, and as a foxy stonecold killer. The ending is a bit meh, but everything getting us there is fun.

Kiss Kiss Bang Bang
Shane Black scripts and directs, Robert Downey Jnr and Val Kilmer star. Just better all round. Something to do with a minor crook somehow ending up in Hollywood as a possible leading man in a new blockbuster by way of mistaken identity, and teaming up with a private detective as bodies start piling up. Good, old-fashioned hokey stuff.

Cloverfield
Handycam, destruction of New York, scary stuff, produced by JJ Lost Abrams, cast full of nobody you’ve heard of; I thought it was great, the LLF not so.

Bongwater
Early Frat Packer, with Luke Wilson as amiable weed dealer in destructive relationship with Alicia Witt. Jack Black, Andy Dick and Jamie Kennedy are all in there too.

The Omen (2006)
Pointless and rubbish remake. Julia Stiles is even more ineffectual than in the Bourne flicks. Pete Postlethwaite and David Thewlis do their best to impersonate Patrick Troughton and David Warner. The sequences are mostly inferior carbon copies of the originals, though the reporter’s demise in Jerusalem is riffed upon in a moderately interesting way. Note: Prague does not look like London.

The Front Page
Rather lacklustre adaptation of the Hecht/MacArthur commemoration of the bawdy world of newspapermen in Roaring Twenties Chicago. Given that it revolves around Jack Lemmon and Walter Matthau, and is directed by Billy Wilder, that’s a shame. There’s some really unpleasant moments of misogyny and racism in there too, which the far superior His Girl Friday (the 1940 Cary Grant/Rosalind Russell one) managed to avoid despite being much closer to the source in time.

Bad Influence
One of the more interesting films from that yuppie terror cycle (cf Pacific Heights), with weedy Michael (James Spader) coming under the influence of self-assured and dangerously confident Alex (Rob Lowe). So far so bland; but midway there’s something of a twist, and the tone and pace changes rather effectively. Lisa Zane is most alluring as Claire, a woman Michael falls for, and Christian Clemenson is convincingly flakey as Michael’s stoner brother. An early effort from director Curtis LA Confidential Hanson.

Rather well executed (if ponderous) story of a security guard (John Leguizamo) robbed, shot and suspected of being an inside man.

This was what the British film industry looked like in 1997. I see that the (American) lead, Dan Futterman, later wrote the Capote screenplay.

Bloody awful comic book adaptation with Angelina Jolie and Morgan Freeman paying the rent, and James McEvoy trying to break into Hollywood. It’s about weavers, and assassins, and, erm, stuff. Seems to have completely lost sight of what Mark Millar’s original was trying to say. The bullet bending stuff is nowhere as good as Equilibrium‘s Gun Kata. 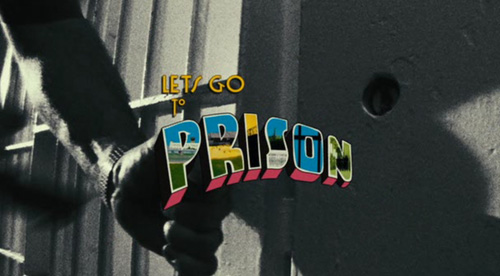 Satisfyingly dark comedy about the American prison system, with Dax Shepard as John Lyshitski, a recidivist with attitude, and Will Arnett as Nelson Biederman IV, the son of his recently deceased arch-nemesis Judge Nelosn Biederman III.

Gregory Peck, Billie Whitelaw, Lee Remick, Patrick Troughton and David Warner all taking their hocks up to eleven in the cause of a great schlocky horror about the antichrist. Three of the most memorable deaths in my film watching life, as well as a genuinely scary safari park moment, an unsurpassed stunt fall – with the lead actress’s face in shot!, the Waldorf salad chap from Fawlty Towers, and an unsettling ending.