Empire Records
Messy, unstructured, episodic and ultimately utterly empty, but still rather cheery. A gaggle of young record store employees learn about life and each other, all whilst trying to keep their workplace in business. Directed by Allan Moyles, who also did Pump Up The Volume, with before-they-were-famous turns from Liv Tyler, Renée Zellwegger, Robin Tunney, Rory Cochrane etc. Anthony LaPaglia is nominally the adult in charge, Ethan Embry is great as the giggly cashier Mark, Brendan Sexton III is a confused shoplifter, Maxwell Caulfield (from Grease 2) is deliciously sleazy as an MOR singer there for a signing session.

Invasion Of The Body Snatchers (1978 version)
Philip Kaufman presents an unsettling updating of the Cold War era allegorical SF b-movie, with Donald Sutherland and Veronica Cartwright amongst those battling to stay ahead of the zombie-like invaders in seventies San Francisco.

Excellent Cadavers
HBO telemovie about Sicily, the Mafia, Giovanni Falcone and the Maxi Trial. Given the subject matter it should have been great, but it’s not. Chazz Palminteri and F Murray Abraham give it their best shot, though.

Something Wild
Lulu wig-wearing freewheeler Audrey (Melanie Griffith) picks up repressed suit Charlie (Jeff Daniels) for a couple of days of fun on the road; her ex Ray (Ray Liotta) threatens to spoil everything. Jonathan Demme directs with panache.

Hackers
Breezy, cheesy, cheeky entertainment about a band of young computer nerds being framed for a hack they didn’t commit. Jonny Lee Miller, Angelina Jolie and Matthew Lillard help you forget about insanely slow typing, lines like “Twenty-eight BPS!!!” and yet another Hollywood interpretation of ‘a nightclub’. There’s also a decent soundtrack (Orbital, Underworld, Prodigy, Carl Cox, erm, Urban Dance Squad…), Bunk from The Wire and the shrink from The Sopranos. CdM has a nice review of it. 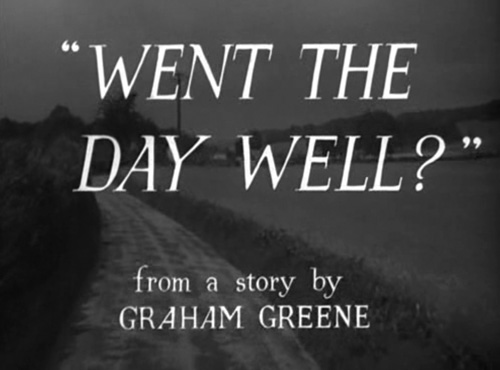 Went The Day Well?
A what-if-the-Jerries-invaded? specfic from Ealing, which was liberally looted for Jack Higgins’ ‘The Eagle Has Landed’ and its film adaptation. Director Cavalcanti subverts the ‘Be Pure/Be Vigilant/Behave’-style win-the-war-on-the-Home-Front message, showing the villagers of a sleepy English hamlet to be just as bloodthirsty as the Nazis who infiltrate it. Shocking use of violence for a 1942 film.

The Hitch-Hiker
‘Based on true events’, two friends out for a weekend of hunting end up at the mercy of a hitchhiking psychopath. A snappy, vicious noir.

Stage Fright
Hitchcock gets all playful with notions of performance and acting, using a melodrama about a murder amidst a group of thespy types as his launchpad into something more interesting. What is real? Can a fiction film lie to its audience? Marlene Dietrich, Alastair Sim and Richard Todd (not bandying round insensitive racial epithets for once) are the highlights. Well, that and Hitch’s direction.

Shock
Cheap but effective shocker, with upscale shrink Vincent Price trying to cover up a crime, but conflicted by his doctorly obligations.

Derailed
I gave this a go because it was directed by Mikael Håfström, whose 1408 I was so underwhelmed by. Clive Owen is a stressed out advertising executive. This is not a good start. His marriage to Angel from Home And Away is under strain. He starts an affair with Rachel from Friends, is beaten up by Vinz from La Haine, seeks help from Rza from the Wu Tang, is investigated by the Fed from The Usual Suspects. The ‘twist’ is evident from the beginning, at least to anyone who’s ever seen a twist thriller, or anything by David Mamet. Pretty but dull.

He Walked By Night
‘Gritty noir’ is the expression. Clinical, amoral thief Richard Basehart kills a cop early on, changes up so he can’t be identified by his MO, but is relentlessly chased down by vengeful detectives. I was rooting for the bad guy.

An Inspector Calls
Alastair Sim is the inspector in this pedestrian (but watchable) adaptation of JB Priestley’s mildly class conscious potboiler. Bryan Forbes (Mr Nanette Newman and writer or director of gems such as The Cockleshell Heroes, The League Of Gentlemen, I Was Monty’s Double and Whistle Down The Wind) is excellent as Eric, the drunken son in a gruesome monied family.

Shanghai Noon
I went to see this at the cinema. I was disappointed then, and I was disappointed when I rewatched it the other day. The premise – Chinese Imperial Guard Jackie Chan ends up in the WIld West, teams up with laconic outlaw Owen Wilson – is great. It’s well performed. The two leads have a nice rapport. It’s just boring, and it drags. The action sequences aren’t shot to the benefit of Chan’s skills. It looks a mess.

Shanghai Knights
The sequel to the above, with our heroes transplanted to London. Much more enjoyable, much more effective. Lots of late Victorian era tropes are thrown in – Jack The Ripper, Sherlock Holmes, the birth of motor transportation; there are nice visual steals (the umbrella sequence, Keystone Kops) as well as teefed dialogue and terrible English accents (mostly from English actors). It’s fun.

Beat The Devil
Rather dull John Huston quest movie, taking the piss out of his own Maltese Falcon. Writer Truman Capote drops names from his involvement in it to get the Holcomb locals to open up to him in both Infamous and Capote, which was the only reason why I watched it. Bogey looks uncomfortable throughout. Jennifer Jones is rather good fun, though.

Hue And Cry
A Charles Crichton-directed, TEB Clarke-scripted Ealing comedy, set in bomb-ravaged East London in the immediate postwar period. A group of kids think that a story paper is being used by a master criminal to pass instructions on to his underlings. There’s a lot more to it than that. The best film I’ve seen this week that I’d not previously watched.

Martian Child
John Cusack is a science fiction writer still missing his dead wife. He decides he wants to adopt a troubled orphan who thinks he is an alien. Less cloying than it could be. The LLF did ask whether JC turned down any roles these days, going on his appearance in this and 1408. Toby from The West Wing turns up as an evil social worker (okay, not evil, but definitely a social worker).

300
Zach Snyder delivers an energetic, mostly-faithful-to-the-text version of Frank Miller’s comic book about Spartans holding off Persian hordes at Thermopylae. Entertaining cultural propaganda, though as the LLF pointed out, “not much happens in this, does it? It’s just one long fight.”

From Hell
Gobsmackingly poor Hughes Brothers’ version of Alan Moore and Eddie Campbell’s thoughtful comic book meditation on Jack the Ripper, his deeds and his effect. Johnny Depp and Heather Graham wheel out comedy cockney, every working actor in England gets to cash in their artistic integrity for a pay cheque. 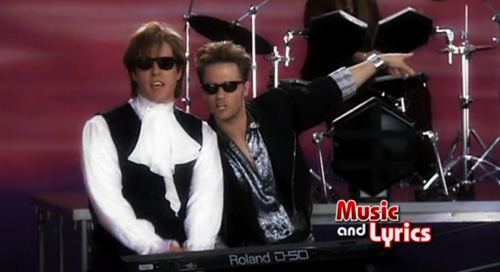 Music And Lyrics
Fun romcom with Hugh Grant as a washed up 80s pop star (think: Andrew Ridgley meets the dude from Dollar) forced from his cosy convention PA circuit into writing a new song for a Christina/Britney-style starlet. Drew Barrymore is his ditzy plant waterer with a gift for writing lyrics. You can guess the rest.

Vicky Cristina Barcelona
Woody Allen at least has the courtesy not to stick himself in front of the camera in this one, about two (rather annoying) young American women in Spain (Scarlett Johansson and Rebecca Hall, last seen as young Sophie in The Camomile Lawn), who meet a brooding Spanish painter (Javier Bardem). It definitely perks up when his (bipolar?) ex wife, played by Penelope Cruz, appears. A decent little number about the many shapes love takes. The LLF wasn’t impressed by the whole ‘in Barcelona to research Catalan identity’ thing (“She can’t speak Spanish or Catalan, so how does that work?”)

Divine Secrets Of The Ya-Ya Sisterhood
Cosy Southern nostalgia in the Fried Green Tomatoes/Miss Daisy vein. Okay but not great. 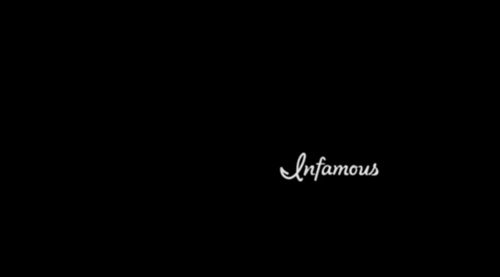 Infamous
Toby Jones impersonates Truman Capote as he researches and writes ‘In Cold Blood’. Sandra Bullock is very good as his friend Nelle Harper Lee, Daniel Craig Jr. is menacing as killer Perry Smith, Jeff Daniels is wet-eyed as lawman Alvin Dewey. The sequences with Capote’s New York scene friends as talking heads were distracting, and made me think of Casual Sex?, for some reason.

Oh, Mr Porter!
Will Hay vehicle based on a popular play by Arnold Ridley (Private Godfrey from Dad’s Army!), which in turn seemed to inspire every Scooby Doo plot, ever. Will is a station master at a sleepy rural railway station on the Irish border, where strange things are afoot. Naturally there is a perfecly reasonable explanation. I like this for the comedy interplay between Will and his two feckless colleagues, played by Moore Marriott and Graham Moffatt, though the actual plot is a bit boring.

The Ghost Train
Arthur Askey vehicle based on a popular play by Arnold Ridley (Private Godfrey from Dad’s Army!), which in turn seemed to inspire every Scooby Doo plot, ever. Arthur is an annoying tit who gets stranded at a remote railway station late one night, along with a bunch of other people, and strange things are afoot. Naturally there is a perfecly reasonable explanation. Quite a taut little comedy thriller, with shameless don’t-you-know-there’s-a-war-on touches.

Reds
Warren Beatty’s quite good take on John Reed’s Ten Days That Shook The World take on the Bolshevik Revolution, with Diane Keaton sparring impressively with the director-star.

A Simple Plan
I was in a Sam Raimi mood. This one’s an adaptation of a novel by Scott Smith, about a plane full of cash crashing in a snowy Minnesota backwoods. Its arrival provides a moral quandary for the man who finds it, an honest Joe by the name of Hank Mitchell (Bill Paxton), and cracks soon develop in the relationships between him, his simple-minded brother Jakob (Billy Bob Thornton), and Jakob’s drunken bum friend Lou (Brent Briscoe).

2 Days In Paris
A pleasant little chalk-and-cheese romantic comedy, written, directed and starring Julie Delpy as a French photographer taking a short pitstop in her home town with her American boyfriend. Well, it’s not really a romcom, it’s more just looking at the different perspectives and objectives that people hold on or work towards in relationships, notably those of the optimistic Marion (Delpy) and the pessimistic Jack (Adam Goldberg). Both leads are very watchable, though Jack isn’t really given much to do other than be a neurotic New York Jew. The bits where Jack comes to realise that Marion was maybe being a little conservative when telling him about the ‘few’ boyfriends she’s had in the past made I ROFL though, as did her mother popping in with the laundry.